I often use this blog as an extension to Twitter. Twitter doesn't have the space so I write something here.

In essence today my posing is inspired by a question from Dr Georgina Judd as to whether the buffer zones suggested by Defra are considered good practice. These are areas near grazing animals where the plant should, according to them, be eliminated.

You would expect that Defra as the government department in charge in England would know what they are talking about on the subject of ragwort, but they don't. THEY REALLY DON'T!

It is pretty obvious really. Their estimation of risk is hopeless and useless. They take figures that have every appearance of being conjured out of thin air to scare people, and use them in the most crassly wrong way to claim that 500 horses a year are dying. They talk about "confirmed cases" when anyone who knows the science knows it is impossible to confirm poisoning 100%.
(Those links go to my website which provides references for everything I can find and as I am working on this blog entry another paper has come in from a colleague with a reference to yet another veterinary text confirming this.)

There has obviously been a political decision just to accept the horsey lobby's nonsense and apply it as if it were true.

The buffer zones bear no relationship to the distances known for seed dispersal and are based on the fallacy that animals eat the fresh plant, when they have evolved to avoid it and there are natural detoxification routes.

Yes animals do avoid these plants. You would hardly believe it from the propaganda. Just to give you an example. This is the text that I first read a few hours ago. It is talking about ALL the plants that contain these toxins. They comprise about 3% of all plant species (Funny you never hear a fuss about the others!) The title of the book is quite simply "Veterinary Medicine" and is written by FOUR veterinary professors.

The plants are not very palatable and are usually eaten in sufficient quantity to be associated with illness only when other feed is short, or when they are included accidentally in conserved fodder such as hay or when their seeds contaminate feed grains.


It is really simple. Animals that were naturally poisoned didn't pass on their genes the ones that avoided the plant or detoxified it.

Defra claim it is a cumulative poison and ignore the biochemistry. It can be but not at every dose as I'll explain below. All most all of their "science"  comes from a source in the horsey lobby , Professor Derek Knottenbelt, and as I'll explain below, my honest opinion is that nobody with any sense should listen to him.

I've already posted it on twitter, but just for completeness sake and anyone reading this blog entry in isolation, here is the crazy claim in a quote I posted.

This quote comes a book called The Horse and Pony Care Bible in Association with Horse and Hound published in 2007.
Professor Knottenbelt is quoted as saying: -

`I would not normally advocate the eradication of any species, but this one has nothing to offer. I don't accept that eradicating ragwort would eradicate the Cinnabar Moth, which feeds on it. Ragwort is burgeoning and the Cinnabar is declining. In fact, I believe it is being poisoned. The moth was common throughout the years that ragwort was rare and now that ragwort is widespread, Cinnabar Moths are difficult to find. If we care about the moth, we have to find out why its population is declining in the face of an ad lib supply of "feed'.


It is an INSANE idea!


"Ingestion of the ragwort plant (in any state in any amount) will result in the absorption of the pyrrolizidine alkaloid (called jacobin[sic]) that passes to the liver in the portal blood vessels. On arrival the toxin damages the liver cells to an extent that is proportional to the concentration of the chemical.


It seems that again the professor is mistaken for it appears ,according to the scientific literature. that the statement "the pyrrolizidine alkaloid (called jacobin [sic])" is incorrect. Far from being a single pyrrolizidine alkaloid there are in fact fourteen of them which have been recorded as occurring in common ragwort of which Jacobine ( as it is correctly spelled) is only one. They are Senecivernine,Senecionine,Seneciphylline,Spartioidine,Integerrimine,Jacobine, Jacozine,Jacoline,Erucifoline,Jaconine,Adonifoline,Usaramine,Otosenine,Eruciflorine and Retrorsine. These are not necessarily present in every plant and vary in quantity. (Pelser et al.2005) and their level of toxicity may also vary depending how efficiently they are metabolised.

It is questionable whether the claim that ragwort in any amount will result in the absorption of the alkaloids is correct, and the following statement that the toxin damages the liver cells in proportion would seem to overstate the simplicity of the process. In fact there are a number of factors which might prevent the alkaloids from being absorbed where there are only small quantities, bacterial destruction inside the digestive tract and then simple failure to be absorbed etc..
Then they are actually not poisonous in themselves until they have undergone conversion into other chemicals which are the actual toxins. Fu et al ( 2004) Each of these steps is unlikely to be 100% efficient and the resultant pyrrole compounds are highly reactive and can react with numerous substances in the cell. They will only result in a toxic effect when they attach themselves to DNA molecules.


I will be amending that page as one recent paper I have come across crystalises the science on detoxification. The alkaloids are non-toxic in themselves and only become toxic because of degradation BUT, and Defra appear to know absolutely nothing about this, there are 3 routes of degradation and only ONE causes problems. I knew about this but the paper makes it clearer and I can quote it for clarity.

I wrote an entry on this blog a while ago about an article I'd found by Professor Knottenbelt. I didn't cover everything and  it is so full of problems that it will take a while for me to write a page on it on my website. The falsehoods in it have the habit of popping up all over the place. It is known that he  gave a number of talks  and undoubtedly there will be other articles. His incorrect ideas have a habit spreading.


There are significant problems with what he says and here is a larger but still partial list of a dozen of them just from this one article.

He says it is spreading catastrophically. Government survey data says a significant decline.

He uses a figure for seed production that has been banned in an advert by the Advertising Standards Authority. It didn't fit reality and was banned as misleading. It is likely he was the ultimate source.

He quotes a laboratory figure for germination and says that it applies to all seeds. If that were the case we would all be buried by the plant in a few generations.

He gets the law wrong.

He makes misleading statements about groundsel as a foodplant for the cinnabar moth.

He blames ragwort  (again )for the decline of the cinnabar moth. BONKERS! It needs it as a food.

He says. "The poisonous alkaloids have been found in milk and honey, and although the amounts are so small as to be insignificant, the presence of any is unacceptable."
The poor logic in this is poor surely? If something is scientifically insignificant as a danger then there is no problem!

He quotes a notorious and crazily derived survey to claim 6500 horses a year die from ragwort poisoning. It takes a tiny and very inaccurate response rate and multiplies it as if everyone had responded!

He says estimates research will show one in five ordinary horses have poisoning. It was done. It showed nothing of the sort, almost nothing at all. A sample of 91 sick horses ( not ordinary ones) had 1 case in a mistreated animal.

He accuses it of wiping out biodiversity, when it is one of our most ecologically valuable plants.

He says things like this which make the plant sound terrible but are actually rather pointless, "Recoveries from terminal stage liver failure are not possible." Oh dear!  If its terminal of course the animal can't recover because that is what terminal means!

Clearly there are serious problems with what he says, yet it seems Defra accept him blindly.  A while ago a colleague made a Freedom of Information Request to them about the evidence behind one of the scary claims in their Code of Practice.  The reply said that they didn't have any evidence, "but Professor Knottenbelt thinks it does."

The other significant things  about the Code of Practice document are what Defra said about it a while ago. This is a page from the COP. They implied it is an "invasive non-native plant" 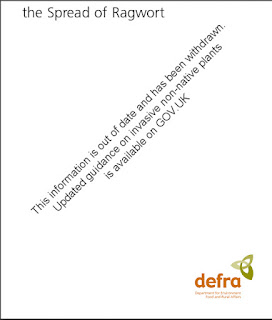 The significant thing here is that they say themselves that the information is out of date and that it has been withdrawn.

The Ragwort Control Act is very clear. Any Code of Practice created has to be put before parliament. They created some really bad new advice that implied strongly a lot of incorrect things including that the law said it was forbidden to plant ragwort. It isn't. Then they reinstated the old document in effect making a new Code of Practice. It hasn't been put before parliament so surely it isn't legal?

I could go on and on about how bad Defra's work is on this and how they mess things up. The problem is twofold, there doesn't seem to be any real expertise in the people drawing up advice in general and there is a political push to do something based on a campaign full of nonsensical claims.

In short their work does not conform to reality as shown by the peer reviewed research. It therefore cannot be trusted.